The Similar Communities Model helps users understand which communities are more and less like theirs, across eight different social factors. It helps Seer users take actions based on learnings from similar communities.

“Every dataset has a story; this is the Similar Communities Model story.”

The wisdom of community

Shortly after Seer was formed, we began working closely with the Greater Shepparton Lighthouse Project, a collective impact organisation providing front-line and wholistic support for the Greater Shepparton community. The Shepparton community, nestled within the Goulburn Valley region in Northern Victoria, was the birthplace of the Shepparton Preserving Company (SPC, now SPC Ardmona) – to this day a cornerstone of the powerful agricultural industry at the southern tip of Australia’s food bowl; the Murray Darling basin.

In recent years, however, some social health indicators such as educational outcomes have declined. The independent MP for the Shepparton District Suzanna Sheer wrote in July of 2018:

“In Shepparton I am confident that our community is ready for change. We are aware of the statistics at our schools. We want better outcomes for our children. We already have 300 local residents volunteering through our local Lighthouse Project. They are going into the schools to read to prep-grade students, acting as mentors to year 7s and participating in other reading programs throughout the system. Some assistance must now come from the government to help us address what has been a progressive decline in education in Shepparton.” 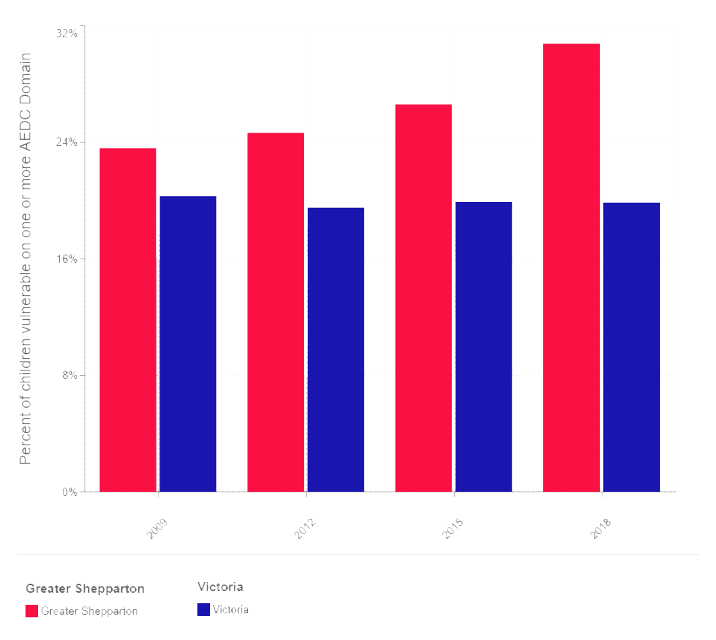 This decline in educational outcomes was among the factors that motivated the formation of the Greater Shepparton Lighthouse Project (GSLP) in 2014. Their work, as celebrated by Sheed, focussed on improving school outcomes through in-school support for children, while at the same time they recognised that much of their impact could be described as helping kids catch up to a level of school readiness typical for children in the rest of the state.

The canonical indicator of school readiness in Australia is the Australian Early Development Census (AEDC) which is conducted every 3 years and measures developmental readiness of children across a range of domains. The rate of developmental vulnerability on one or more AEDC domains has been increasing in Greater Shepparton since the data was first published in 2009, and in 2018 was more than one and a half times the Victorian state average.

Two important questions were put forward by the GSLP stakeholders:

It was in response to these questions that we built, refined and expanded the Similar Communities model. The model compares one focus community (e.g. Greater Shepparton) to other communities around Australia against a suite of social factors and finds the communities that are most like the focus community.

The DNA of a community

The model currently includes eight factors which were designed in consultation with the stakeholders at GSLP to reflect their ideas about the factors that are important to describe the make-up of a community – like the DNA or fingerprint of a community. The factors were all constructed using Open Data from the Australian Bureau of Statistics (ABS) including the 2016 Census and Socio-Economic Index For Areas (SEIFA).

Overall, Mildura is the most similar community to Greater Shepparton from among all Australian LGAs, followed by Tamworth Reigional, Latrobe (Vic.), Albury, Greater Bendigo, Lockyer Valley and Launceston. These are all regional cities within Victoria, New South Wales and Queensland, many of them also agricultural or industrial regions.

The answer to the first question is now available to us. Comparing rates of vulnerability on one or more and two or more AEDC domains in Greater Shepparton with those of similar communities over time, a rich picture emerges. Many of the similar communities began with similar AEDC results, and some have worsened as Greater Shepparton has worsened, while some have improved or sustained their performance. 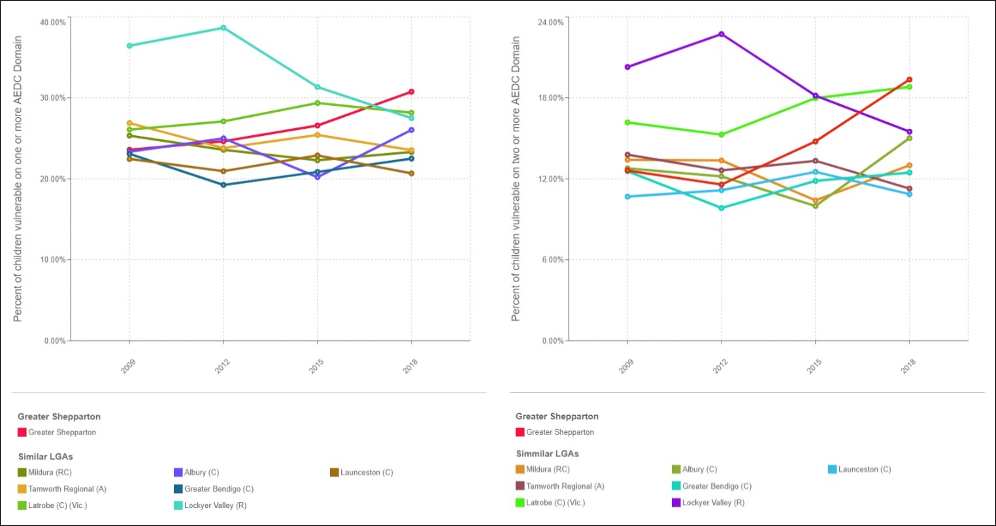 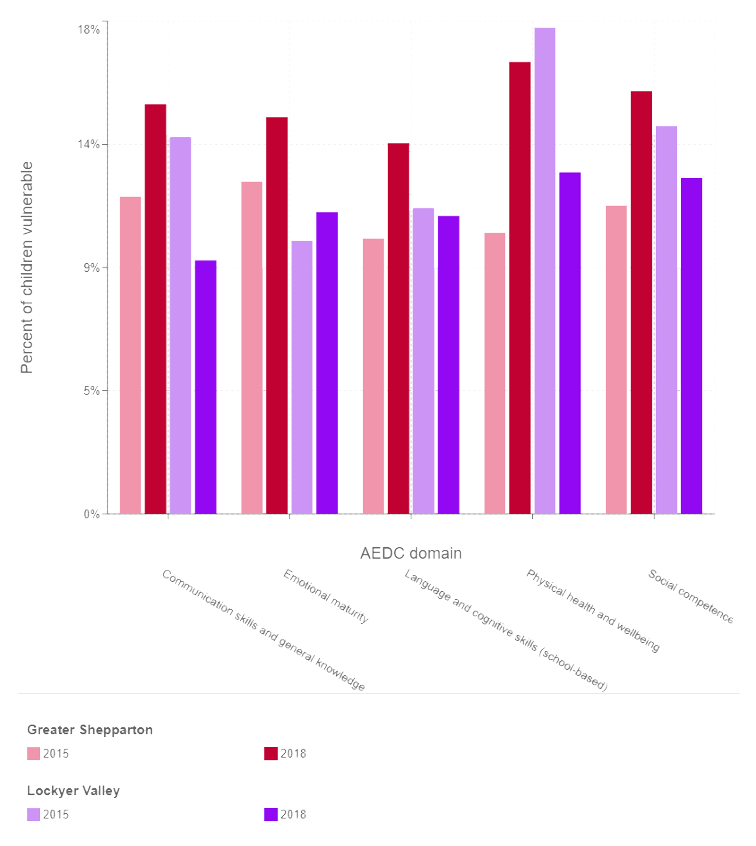 With this information available, it will be possible for communities all over Australia to learn from each other’s successes and failures and develop local actions that the community can have confidence in supporting based on their own research.

Data as a problem solving tool

It is vital that as a society we are better able to be self-determining, better informed so that we can discover and advocate for the change we need, and have better access to Open Data to make that possible.

At Seer we strongly believe that the people within a community have the best knowledge of the needs of that community and should be empowered to make decisions in their own best interests. We also strongly believe in the criticality of data to inform decision making and recognise that Open Data represents the best and sometimes only data resource available to community for that purpose.

The Similiar Communities Model dataset lets you choose features and locations down to a suburb level. This data is being used by policy makers and funding bodies to identify where program funding should be allocated. Service providers use the dataset to identify areas for expansion. This comprehensive dataset is available to Plus subscribers. Standard users can access the free model here.

The free version of our Similar Communities Model is displaying Local Government Areas. With a Seer Plus subscription, you can search by SA2, SA3, postcode and LGA, plus access the full data set to create your own insights.