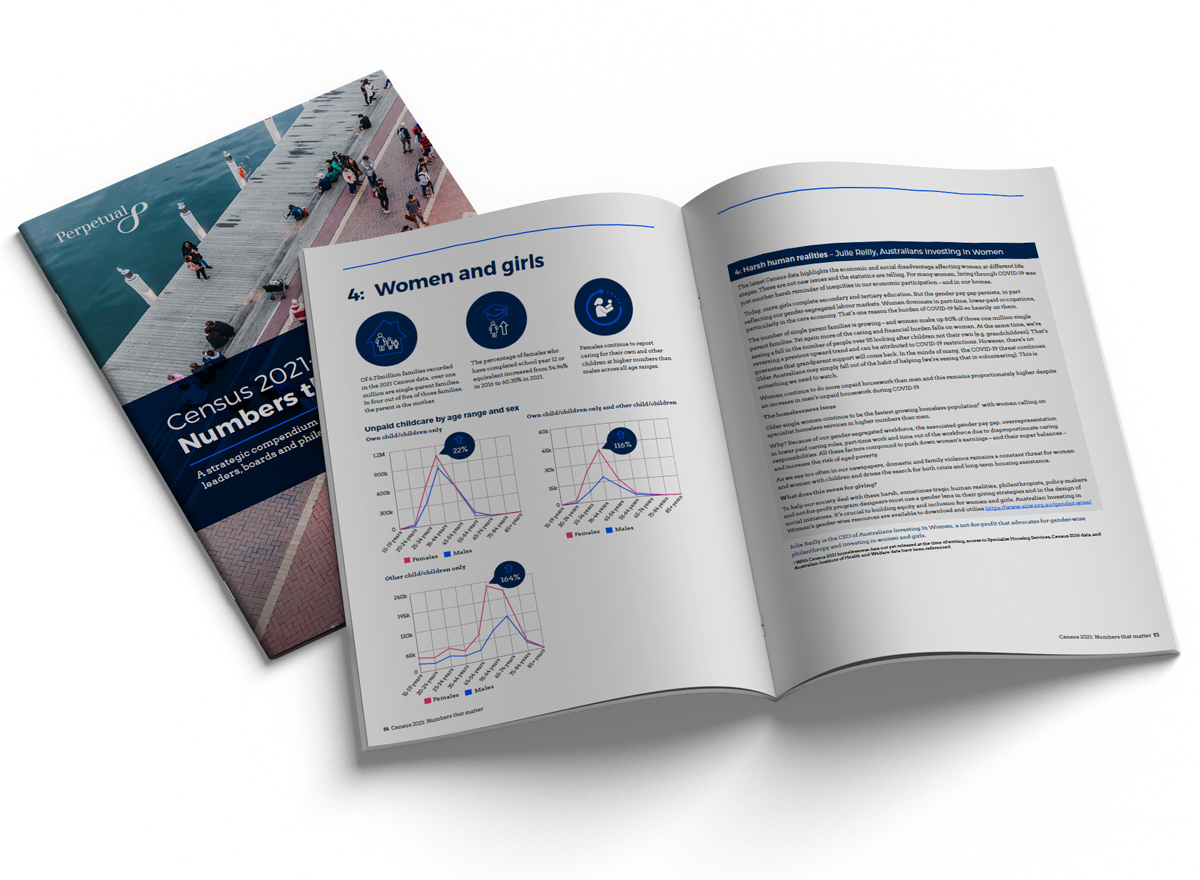 Below is a snapshot of the Women and Girls section from the Census 2021: Numbers that matter report – you can read more about the report and its authors below this story, as well as explore the other core themes covered by the report.

Every five years there’s great excitement about what the latest Australian Census will say about our nation. It is a snapshot in time that provides important data points; but insights can only be drawn when that data is mixed with the experiences of people closely in touch with our communities.  Julie Reilly from Australians Investing in Women provides that invaluable community voice in the story below.

Read more about the lived experiences and voices of community in the full Census 2021: Numbers that matter report.  Delivered by Perpetual Philanthropy and Not-for-profit in conjunction with Seer Data & Analytics.

Females continue to report caring for their own (and other) children at higher numbers than males across all age ranges.

As at the 2016 Census, the number of respondents performing unpaid child care was as follows:

Unpaid Work and Care data from the 2021 Census was released after the publication of the Census 2021: Numbers that matter report.   Therefore, an update on the three graphs from the report (shown above) is as follows:

The second release 2021 Census data can be found here:

The latest Census data highlights the economic and social disadvantage affecting women at different life stages. These are not new issues and the statistics are telling. For many women, living through COVID-19 was just another harsh reminder of inequities in our economic participation – and in our homes.

Today, more girls complete secondary and tertiary education. But the gender pay gap persists, in part reflecting our gender-segregated labour markets. Women dominate in part-time, lower-paid occupations, particularly in the care economy. That’s one reason the burden of COVID-19 fell so heavily on them.

The number of single parent families is growing – and women make up 80% of those one million single parent families. Yet again more of the caring and financial burden falls on women. At the same time, we’re seeing a fall in the number of people over 55 looking after children not their own (e.g. grandchildren). That’s reversing a previous upward trend and can be attributed to COVID-19 restrictions. However, there’s no guarantee that grandparent support will come back. In the minds of many, the COVID-19 threat continues. Older Australians may simply fall out of the habit of helping (we’re seeing that in volunteering). This is something we need to watch.

Older single women continue to be the fastest growing homeless population with women calling on specialist homeless services in higher numbers than men.

Why? Because of our gender-segregated workforce, the associated gender pay gap, overrepresentation in lower paid caring roles, part-time work and time out of the workforce due to disproportionate caring responsibilities. All these factors compound to push down women’s earnings – and their super balances – and increase the risk of aged poverty.

As we see too often in our newspapers, domestic and family violence remains a constant threat for women and women with children and drives the search for both crisis and long-term housing assistance.

What does this mean for giving?

To help our society deal with these harsh, sometimes tragic human realities, philanthropists, policy-makers and not-for-profit program designers must use a gender lens in their giving strategies and in the design of social initiatives. It’s crucial to building equity and inclusion for women and girls. Australian Investing in Women’s gender-wise resources are available to download and utilise https://www.aiiw.org.au/gender-wise/.

With thanks to our community voice for this story:

Julie Reilly is the CEO of Australians Investing In Women, a not-for-profit that advocates for gender-wise philanthropy and investing in women and girls.

With Census 2021 homelessness data not yet released at the time of writing, access to Specialist Housing Services, Census 2016 data, and Australian Institute of Health and Welfare data have been referenced.  The most recent ABS release can be found here.