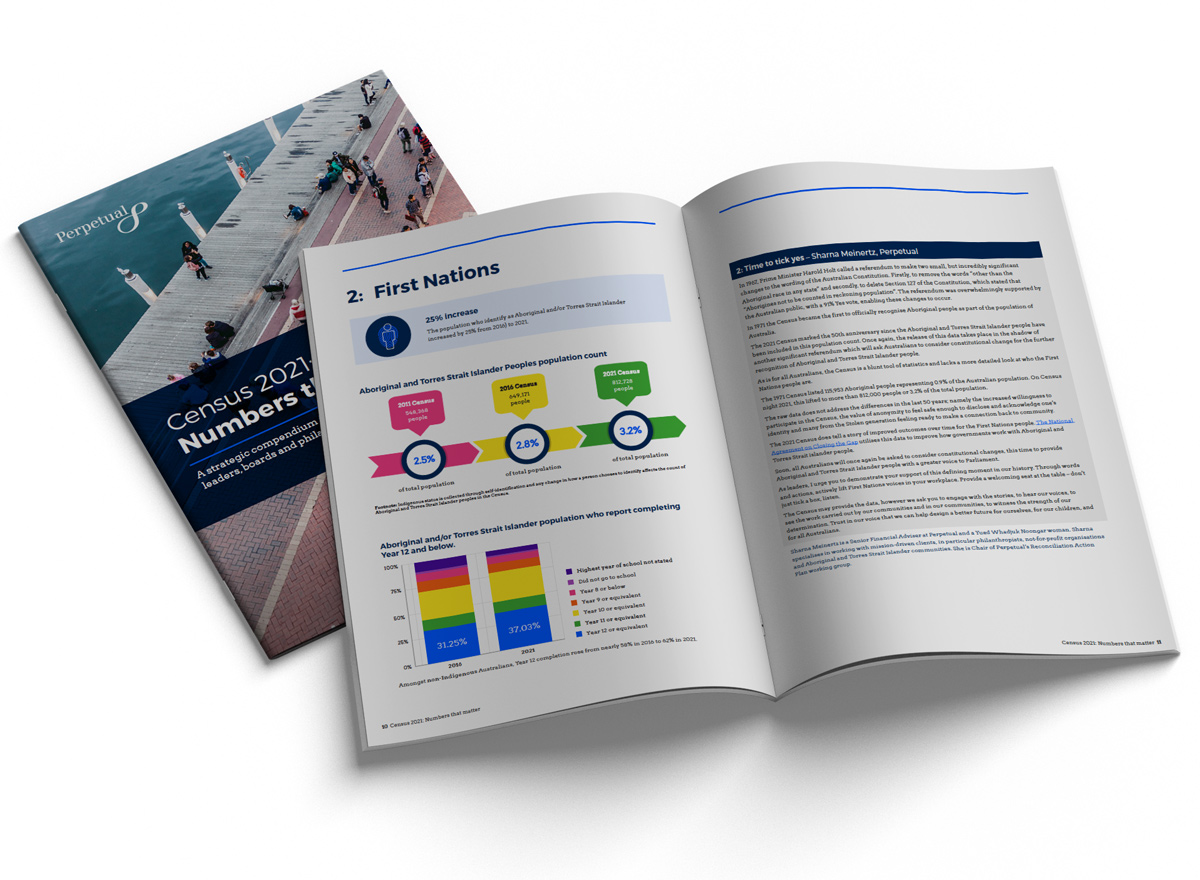 Below is a snapshot of the First Nations section from the Census 2021: Numbers that matter report – you can read more about the report and its authors below this story, as well as explore the other core themes covered by the report.

Every five years there’s great excitement about what the latest Australian Census will say about our nation. It is a snapshot in time that provides important data points; but insights can only be drawn when that data is mixed with the experiences of people closely in touch with our communities.  Sharna Meinertz from Perpetual provides that invaluable community voice in the story below.

Read more about the lived experiences and voices of community in the full Census 2021: Numbers that matter report.  Delivered by Perpetual Philanthropy and Not-for-profit in conjunction with Seer Data & Analytics.

Indigenous status is collected through self-identification and any change in how a person chooses to identify affects the count of Aboriginal and Torres Strait Islander peoples in the Census.  The population not stating their indigenous status fell from 1.4 million to 1.2 million in 2021.

The overall percentage of Australia’s population identifying as Aboriginal and/or Torres Strait Islander has increased from 2.29% in 2006 to 3.2% in 2021.

In 1967, Prime Minister Harold Holt called a referendum to make two small, but incredibly significant changes to the wording of the Australian Constitution. Firstly, to remove the words “other than the Aboriginal race in any state” and secondly, to delete Section 127 of the Constitution, which stated that “Aborigines not to be counted in reckoning population”. The referendum was overwhelmingly supported by the Australian public, with a 91% Yes vote, enabling these changes to occur.

In 1971 the Census became the first to officially recognise Aboriginal people as part of the population of Australia.

The 2021 Census marked the 50th anniversary since the Aboriginal and Torres Strait Islander people have been included in this population count. Once again, the release of this data takes place in the shadow of another significant referendum which will ask Australians to consider constitutional change for the further recognition of Aboriginal and Torres Strait Islander people.

As is for all Australians, the Census is a blunt tool of statistics and lacks a more detailed look at who the First Nations people are.

The raw data does not address the differences in the last 50 years; namely the increased willingness to participate in the Census, the value of anonymity to feel safe enough to disclose and acknowledge one’s identity and many from the Stolen generation feeling ready to make a connection back to community.

The 2021 Census does tell a story of improved outcomes over time for the First Nations people. The National Agreement on Closing the Gap utilises this data to improve how governments work with Aboriginal and Torres Strait islander people.

Soon, all Australians will once again be asked to consider constitutional changes, this time to provide Aboriginal and Torres Strait Islander people with a greater voice to Parliament.

As leaders, I urge you to demonstrate your support of this defining moment in our history. Through words and actions, actively lift First Nations voices in your workplace. Provide a welcoming seat at the table – don’t just tick a box, listen.

The Census may provide the data, however we ask you to engage with the stories, to hear our voices, to see the work carried out by our communities and in our communities, to witness the strength of our determination. Trust in our voice that we can help design a better future for ourselves, for our children, and for all Australians.

With thanks to our community voice for this story: